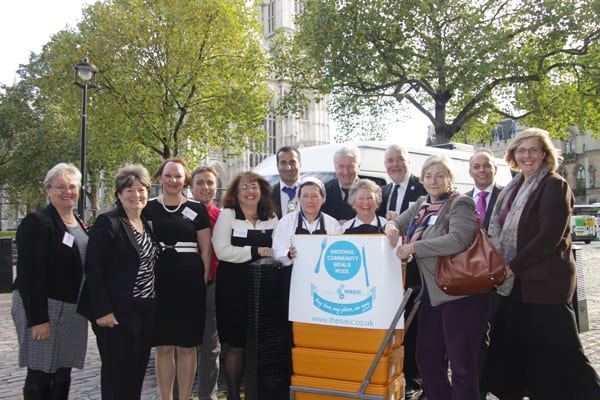 Community Meals are under threat as local authorities see the removal of this service as a good way of saving money without regard for the financial consequences of poor nutrition, loneliness and isolation resulting in more hospital admissions.

The National Association of Care Catering’s National Community Meals Week 2013 (11-15 November 2013) gained strong support from high-profile public figures, including Rosemary Shrager, Esther Rantzen and Rosie Boycott, in the wake of the news that yet another local authority is to close its Meals on Wheels service from 31 March 2014. 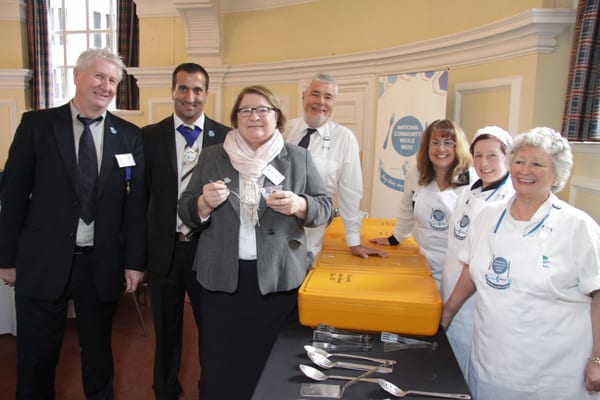 BGL Rieber supports the NACC in its endeavour to maintain this important public service.

Reprinted below is the text of a release from the NACC covering this year’s Community Meals Week and in particular, the ‘Pop up luncheon’, for which we provided Rieber Thermoport food transport containers to keep the meals hot.

In a letter to BGL Rieber’s Regional Sales Manager Paul Franks, the NACC’s Neel Radia commented: “I just wanted to take opportunity in thanking you and BGL Rieber for supplying the hot boxes for the launch of National Community Meals Week as arranged with Roger Denton. The event was very successful and a lot of people commented on how excellent the boxes were in keeping the meals so hot (one person was really shocked). Thank you again for your continued support. Neel Radia MIH, National Chair, National Association of Care Catering (NACC).

National Community Meals Week sets out to publicise the benefits of the vital community meals service, demonstrate the important role it plays in protecting and enriching the lives of the elderly and vulnerable in the community, and send out the strong message that  closing the service to save money will have dire consequences for the nation’s elderly and its communities.

The main national event of the week took place on Tuesday 12  November at Central Hall Westminster. The NACC created a pop-up luncheon club to highlight how easy it is to set up a luncheon club for the elderly and vulnerable in the community. The event,  attended by invited guests, dignitaries and public figures associated with Community Meals, highlighted the rapidly deteriorating situation and put forward the strong social and financial argument for its reversal.

The NACC understands that the latest withdrawal of service, in a London Borough, will affect five day centres, as well as 200 elderly and vulnerable residents accustomed to having their meals delivered personally to their homes. All to save just £190k per annum and  currently with no provision made for those who will lose this frontline service. 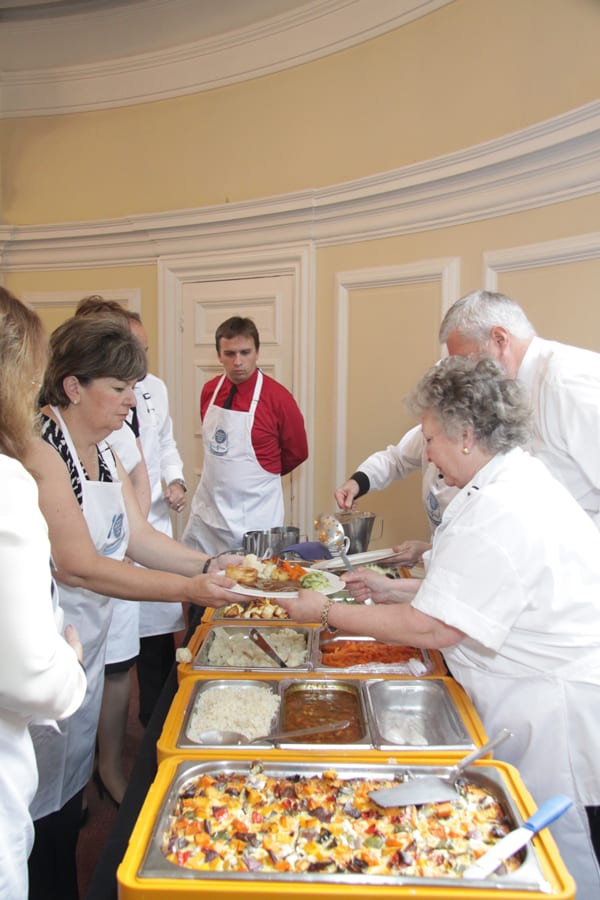 This comes on top of 11, out of a total of 33 London authorities,  which have withdrawn the service over the past two years. A further 20 local authorities across the rest of the UK also hang in the balance – they are currently in consultation to decide whether to stop the services with the same deadline of 31 March 2014.

And this is despite the fact that malnourished patients visiting their GP incur an additional health care cost of £1449 per patient in the year following diagnosis1. By contrast, investing in a Community Meal service has shown that every £1 invested leads to a Social  Return on Investment of between £3.00 and £5.302.

The slogan for National Community Meals Week ‘Any time, any place, we care’ encapsulates the reality that this vital service, whether delivered to the home or through Day Centres and Luncheon Clubs, is about much more than nutrition and hydration.

It also serves a greater social role, addressing loneliness, social isolation, and safety and security in the home and community. A regular hot meal five days a week may provide the only personal contact a lonely vulnerable or elderly person has that day. That visitor can provide essential help when they come across someone who is weak, sick, cold or distressed with no-one else to turn to. The service is part of the health and social support necessary to enable these vulnerable and elderly people to continue living in their own homes and be socially independent in line with current government policy. It plays an integral part in preventing emergency admissions  to hospitals and care homes and provides part of the framework needed to support the elderly on leaving hospital thus saving billions of the NHS budget.

Research by the NACC has also found that Community Meals  drivers often have more regular contact with people than home care workers and often fulfil a number of roles. These include providing social contact, prompting about medication, bringing in doorstep items, reminding people about the need to drink more fluids, and providing a visual check on health and appetite. 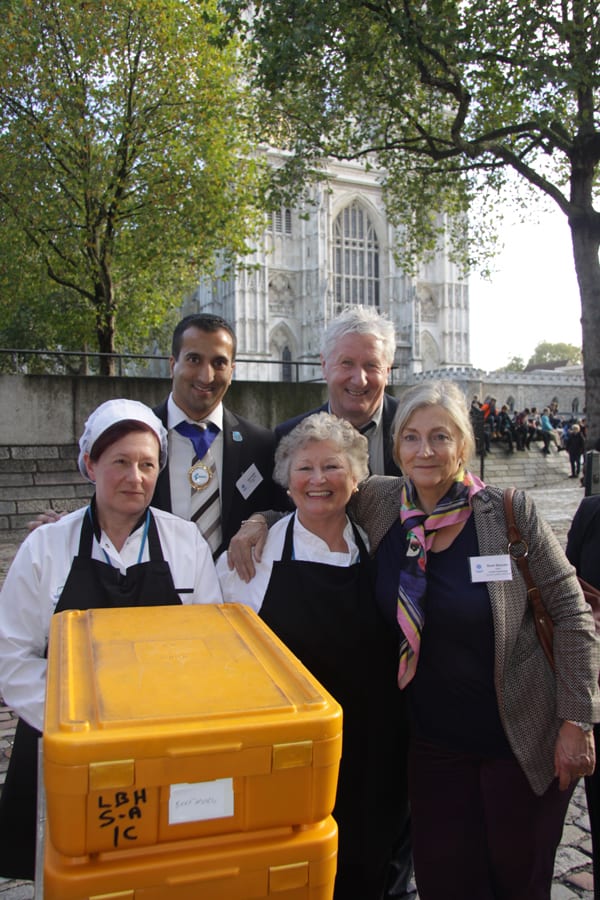 Ongoing reductions in this essential service to the elderly are part of a bigger story across the country. These figures make for shocking reading:
• 19 million community meals on wheels are served in the UK each year.
• This compares with 40 million only 10 years ago.
• Hospital admissions through malnutrition increased by 217% when provision of community meals on wheels decreased over the 5-year period 2003-2008.
• Malnutrition in the elderly costs the UK £7.3 billion every year.
• 800,000 chronically lonely or socially isolated people in the UK (Campaign to End
Loneliness).

Chef Rosemary Shrager attended the pop-up luncheon event and commented: “There could be up to a third of older people over 85 who rely on the Meals on Wheels service. But whether they are paying or subsidised, without the service many could suffer from malnutrition and would maybe never eat a hot meal. About a third of old people rely on good neighbours, friends or family, but for those who don’t have that privilege, Meals on Wheels is a life line.”

Esther Rantzen, Founder of the Silver Line, was unable to attend the event but lent her support to National Community Meals week stating: “I am delighted to support this event to promote the importance of maintaining the provision of a meal delivery service. Through the Silver Line Helpline we will also do our best to support vulnerable older people and link them to these services.”

Neel Radia, National Chair, NACC, commented: “This year, National Community Meals Week is more important than ever and I would like to thank everyone who has been involved in getting out the message that Community Meals is a crucial service that simply must be protected. It is, however, under threat as Local Authorities see its removal as a good way of saving money. This is a very short-sighted view. What they fail to realise is that although in the short term money may be saved, in the long term poor nutrition, loneliness and isolation will lead to more hospital admissions. This will cost the tax payer more money and it won’t resolve the issue as the vicious cycle will continue once the person is discharged back home.

“Community Meals is a valuable and wonderful service that prevents many thousands of vulnerable people becoming malnourished and socially isolated. It also affords them the social independence they deserve. For many service users the human interaction they get through Community Meals is the only interaction they have. You simply cannot deny the overwhelming importance of this in ensuring their physical and emotional safety and wellbeing.”

National Community Meals Week is a fundamental part of the NACC calendar when service providers across the UK unite to raise awareness of this incredibly important service to Local and National Government, and communities across the country. Special activities take place nationwide to demonstrate the value of the Community Meals Service in keeping the vulnerable and elderly in the community nourished, socially independent, and most importantly in their homes for longer, thus potentially delaying or preventing unnecessary admissions to hospitals or care homes which are significantly more expensive. Events also highlight important issues such as security and safety in the home, healthy living, and as the cold weather takes hold, winter living.

The NACC will maintain the momentum of National Community  Meals Week throughout 2014 when a campaign to keep the issue of protecting the Community Meals Service firmly in the spotlight will be unveiled.

For more information on the NACC visit www.thenacc.co.uk