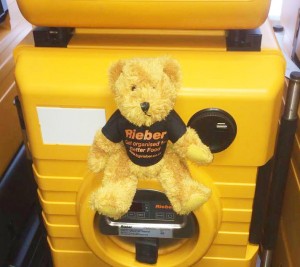 If you are lucky enough to have adopted a RieBear, not only will you have a companion who loves to help serve better food, but you are in with a chance to win up to £500 for your chosen charity, by entering the 2016 RieBear Twitter Competition.

All you have to do is tweet pictures of RieBear helping to serve better food, to #Riebear@BGLRieber, this could be at your place of work or on your travels… he loves at bit of fun.

1.         When you adopt RieBear, your email address will be added to the BGL Rieber database. However, you will be given the opportunity to unsubscribe from any emails via the unsubscribe message in the email.

3.         Employees or agencies of BGL Rieber may not enter the competition.

4.         By adopting RieBear you are accepting these terms and conditions. To enter the RieBear Twitter competition you must tweet pictures of RieBear helping you to serve better food, tweets should be sent to @BGLRieber

7.         You may tweet as many pictures of RieBear helping you to serve better food as you like.

8.         The prize will be sent directly to the registered charity of the winner’s choice.

9.         The prize cannot be exchanged or transferred and cannot be redeemed for cash or any other prize.

10.       BGL Rieber takes no responsibility for entries that are lost, delayed, misdirected or incomplete or cannot be delivered or entered for any technical or other reason. Proof of delivery of the entry is not proof of receipt.

12.       The name and chosen charity of the winners will be published on www.bglrieber.co.uk

14.       The winner may be required for promotional activity.

16.       Any complaints regarding the Prize draw should be sent to this address.

17.       The decision of BGL Rieber in all matters under its control is final and binding.