Including two large cooking kettles, combination ovens, a blast chiller and hot food delivery boxes – replacing a traditional school layout based on cooking ranges with ovens under – the new kitchen at King’s is inspired by the Finnish schools system, an idea introduced by Richard Wedgbury FCSI. 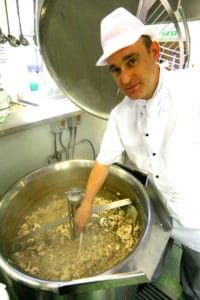 ‘Everything by number, weight and measure’ says why management consultant Wedgbury was originally called in March 2007 by Bursar Peter Kirkbride.

An evaluation of the catering facilities for a new sixth form common room was followed with help on new food standards and purchasing. “We have made significant savings, 12-20% on average across our top 20 items,” said Kirkbride.

The ambition of Kirkbride is for King’s School kitchen to become self-funding. The plan is to improve the uptake from King’s pupils and provide schools outside with food using delivery boxes. “When we start serving more than 300 meals daily the kitchen is going to pay for itself in 3.5 years,” says Kirkbride.

“Already we have seen take up rise from 100 to 250 currently and this will improve as word gets round that things have improved so much. This includes 50 pupils from the nearby Harrowby Infants School who come here for lunch every day. And shortly, we will also start delivering around 100 meals daily to another school locally.

“We would like to add a walk in freezer for storage and another kettle, which will really start to maximize production because we can make one big batch of curry use half immediately and freeze half for regeneration in the combi ovens.

“Our food used to be average, now it is brilliant. You know its working when even the teachers come in to eat and the governors sa

y they have never had such a good school dinner!

“We now have a bright attractive place to eat with two flat screen TVs with sport and news and a 42 inch electronic message board. It’s also ideal for functions in the evenings, weekends or even holiday times.

“The introduction of four serving sections has cut queuing and, unusually, we operate a self-service system. If they are hungry let them have some more, it’s far better than stocking up on crisps afterwards. You need to watch portion sizes but we have great staff who keep an eye on things. The meat portion, for example roast turkey, is two slices but pupils can have as much vegetables as they like.”

King’s is also incorporating cashless sales via thumbprint recognition, already used for class registration. Parents top up online and importantly, can see if the daily £2.13 per two-course lunch has been used.

“It tastes great, is nutritious, balanced, healthy, made from fresh ingredients, as locally sourced as possible – what more could you want?

“Richard Wedgbury was pivotal in guiding us. He understood the equipment and processes and also the need to get people through the dining experience quickly.

“Richard is always helpful and understands the issues and the complications facing the bursar and the catering manager. He helped pick a way through the suppliers and finds people who can help. For example, Tim Dunn’s new design for the dining room which has made the best use of space out of an awkward area. Also, Gareth Newton from BGL Rieber, who supplied the kettles and delivery boxes. Gareth set up a trip to Finland for myself and Catering Manager Stewart Scrupps to visit the schools to see how the system worked and that was our inspiration.

“I would certainly recommend Richard.”

In summer 2008 the new model kitchen was installed. Operated by 10 staff it is under the charge of ex-army chef Stewart Scrupps.

“It’s very modern and I am impressed with the layout. This is also my first time working with these big kettles,” says Scrupps.

“Other schools with this amount of space could cook the same sort of food. Yes I do see this kitchen as the future for school meals.

“I had to adjust to the equipment and to think about the process of producing 200-250 meals per day plus up to 150 snacks using only the 6-burners on a range, the kettles and the combi ovens.

“The kettles are basically big saucepans, which free up the stove space. I don’t need pots on the stove any more, so there is less chance of burning.

“When the kettles are cold in the morning, we can mix pastry, crumble or sponge mix. They are as good as an industrial mixer and really put the air in. Then we can turn the heat on and make rice pudding or custard. The steam jacket means no chance of burning.”

For lunch service, dishes such as pork stroganoff, paella, mashed potato and pasta come from the kettles while the combi ovens produce vegetables, roast meats and potatoes. “The temperature in the kettles gets up to 110degC – nearly frying, perfect for sealing meat. For cheesecake it has an aerator attachment and we can also make bread dough and prove in it.”

Good menu planning is crucial to getting the highest volumes from the equipment. Half a batch of tomato soup, for example, is reserved for service later. The remainder is turned into a tomato sauce for a chicken and pasta dish. One large batch of white sauce could become cheese sauce, mushroom soup and sauce for a chicken dish.

“Cooking times can reduce considerably. Rice pudding would normally take 1.5-2 hours conventionally but in the kettle it takes 40 minutes from scratch.”