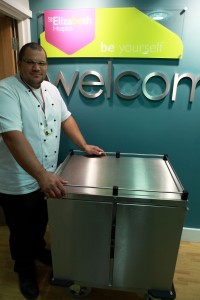 The charity cares, free of charge, for more than 2,000 people a year. The majority are cared for at home but St Elizabeth also provides day care and inpatient beds.

“The trolley we used previously was much heavier and needed two people to move it safely,” explains Head Chef Graham Reid.

Even though the Norm trolley weighs in at 75kg empty, “It is much more manoeuvrable; you can spin it on the spot and it only takes one person to push it. Some of the ladies who serve the meals are quite small and the Norm is easy for them to handle.

“Temperature control is spot on. BGL Rieber’s Regional Sales Manager Paul Franks showed us how to set the unit up, but it only has four buttons and once the temperature is set (+ 30 °C to +110 °C), just one button is pushed to switch on.”

The kitchen runs with eight staff including three chefs working 7 days on, 7 off, “which means never having to worry about cover”. Up to 80 meals are served daily to patients, staff, visitors and volunteers. The ward holds 18 patients and there can also be 10-16 patients on day care.

Catering for special diets is a speciality. Gluten free, diabetic, lactose free, zero potassium and a ‘no red food’ diet (iodine free, for some cancer sufferers) are all catered for.

Reid chose to join the Hospice after cheffing on cruise ships, restaurants and seven-years as head chef at the Wentworth Hotel, Aldeburgh, where he achieved two rosettes and top-10 culinary status among British hotels. Reid is currently Suffolk’s Strongest Man and also a competitor in Britain’s ‘Natural’ Strongest Man contest, which means he does not use hormones or performance enhancing drugs.

“The hours are better and I have a lot more time with my family. And it’s nice to give something back to the community where I grew up. Here, we are cooking for real people and making a difference; sometimes the patients that come in may not have eaten a proper meal for weeks.”

Reid is currently Suffolk’s Strongest Man and also a competitor in Britain’s ‘Natural’ Strongest Man contest, which means he does not use hormones or performance enhancing drugs.

He ‘strength trains’ eight hours weekly with 1.5 hour sessions and eats up to 8,000 calories daily at competition time.

St Elizabeth Hospice is an independent charity which provides services free of charge. Services cost some £9 million a year to run, with almost three quarters of that figure coming from the local community. The Charity relies on fundraising, donations and volunteers. Find out more at: www.stelizabethhospice.org.uk