Metos new Viking MixPan – a bratt pan in a kettle body – with a mixer!

The new Metos Viking MixPan is a bratt pan with a difference!

A circular bratt pan with a mixer, it saves labour, boosts productivity, and ensures consistent results. It also provides commercial kitchen designers, consultants and catering equipment distributors with a real value for money alternative to the more labour intensive and much higher priced ‘multi cookers’.

MixPan is highly suited to ‘isolated’ cooking, is easily operated by just one person and can run automatically for as long as recipes demand. It ensures braised, fried or sauteed food does not stick or burn and the added agitation also gets the most flavour from stock bones.

The MixPan has been designed to save labour and safely speed up cooking processes such as frying.

With a choice of capacities including 100L, 150L and 200L useable capacity, the MixPan has a working temperature up to 250°C.

Meat can be seared in large quantities, herbs, spices, or ready-made sauces added and then the MixPan can be switched into an automatic mixing and stirring process as the dish is cooked.

Auto reverse mixing ensures that minced meat is broken down and seared evenly without clumps.

For hospitals, care homes, or any kitchen needing to produce a wide menu, the MixPan can cook small batches of special meals, shallow or deep fry, as well as produce small to large volumes of any liquid food product.

For pubs, hotels and restaurants, the high temperature frying capability makes the Viking MixPan suitable for cooking batches of favourites such as fried goujons, crispy chicken, or deep-fried prawn canapes for service, as well as producing soups, stocks and sauces during prep time.

Thanks also to the quick recovery time between batches, the MixPan is also ideal for the final cooking of ‘proper’ crispy chips – slow speed agitation from the mixer ensuring all are evenly cooked to crisp perfection.

“The Metos MixPan has a similar footprint to a four-burner range, but it is far more productive. It can replace the requirement for some fryers and conventional stoves with big pots and pans, making kitchens safer, more productive and consistent, but using less labour.”

Tilting height is a safe and easy to use 600 mm, which allows for ergonomic decanting into mobile containers.

The Viking MixPan can boil, braise, mix and like all bratt pans, this circular version can produce a range of foods including pasta sauces, rice and risotto, stews, caramel, dairy sauces, and chocolate. 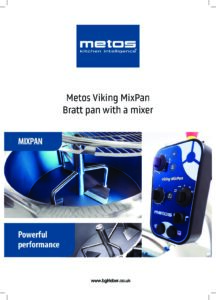 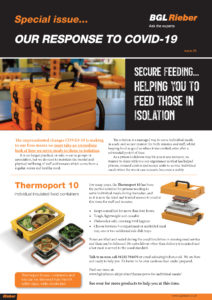 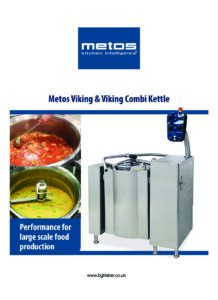 Need more information about Metos new Viking MixPan – a bratt pan in a kettle body – with a mixer!?